You are at Home 2017 March 23 News Romeo Kasengele – Judiciary member of staff chosen by the Confederation of African Football (CAF) to officiate at the just ended under 20 AFCON games, as a referee 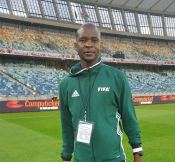 Romeo Kasengele – Judiciary member of staff chosen by the Confederation of African Football (CAF) to officiate at the just ended under 20 AFCON games, as a referee

The Judiciary not only joins the rest of the nation in celebrating the victory of the Zambian Under 20 National Football Team in the just ended Under 20 AFCON Championships, but proudly celebrates a member of staff who was among the only two Zambians, chosen by the Confederation of African Football (CAF) to officiate at the just ended under 20 AFCON games, as a referee.

The name Romeo Kasengele has become one that the whole country and Africa as a continent, and the entire world has become familiar with. Born 36 years ago, Romeo is a proud husband, and father of two boys.
Mr. Kasengele joined the Judiciary of Zambia as a Commercial List Registry Clerk in 2002, and was thereafter trained as a Clerk of Courts, and transferred to the Sheriff’s Office in Ndola, where he currently serves as a Bailiff.
Mr. Kasengele’s interest in sports, particularly football dates back to his primary school days at Kansenji Primary School. Interesting to note is that he performed very badly as a footballer. The fact that he was bad at the game did not however deter his interest in sports, but prompted him to instead try a different arena of the sport and he joined the Referees Association in 1998 while in Grade 11 at St. Edmund Secondary School. He was trained as a referee and continued to rise in the ranks until 2012 when he became an international referee under the Federation Internationale de Football Association (FIFA). He has since refereed at a number on international matches, the hardest so far being the game in which Nigeria played Egypt in Kaduna, which ended in a 1-1 result.
Only two Zambians, namely Romeo Kasengele, and Wisdom Chewe were selected by CAF to officiate at the just ended 2017 under 20 AFCON games, out of a total number of 26 referees from all over Africa. Mr. Kasengele expresses his gratitude to CAF for the honor of having been selected to officiate over the match between Cameroun and Sudan.
Mr. Kasengele thanked the Judiciary for the continuous support that he receives that enables him to answer the call to duty to officiate at international matches.
“Sports generally are very important to the well-being of an individual. In this era where most people suffer from obesity, sports must be embraced by all as they ensure that one remains active, and less susceptible to diseases, particularly obesity, as already mentioned. I urge my fellow members of staff at the Judiciary to engage in sports as it is fulfilling and rewarding both physically and mentally”. Mr. Kasengele said.
The Judiciary of Zambia congratulates Mr. Kasengele, and continues to support and encourage him in his endeavors as he continues to fly the Zambian Flag high. 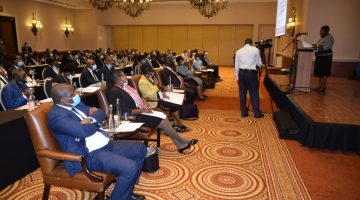 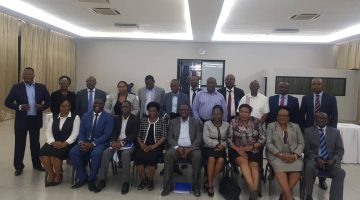